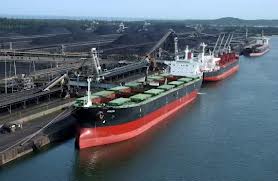 China’s domestic dry bulk shipping fleet capacity continued to grow rapidly in 2012 though the growth was slower than in 2011, according to the latest report released by the Ministry of Transportation, Xinhua reports.

Capacity growth in the four quarters in 2012 were 6 per cent, 4.2 per cent, 1.6 per cent and 2.6 per cent, showing a trend of slowing down except for the fourth quarter, when scheduled deliveries of new ships stimulated growth. Among vessels deployed last year, newbuilds amounted to 6.89 million deadweight tonnes, remaining the main factor of the fast growth of the dry bulk capacity.

However, capacity of the newbuildings in 2012, totalling 5.2 million deadweight tonnes, was much less than the peak of 8.42 million deadweight tonnes in 2011. This is the first time dry bulk capacity fell since it started surging from 2008, indicating looming overcapacity as demand shrank. But as carriers are prudent towards building new vessels, the number of newbuildings will continue to fall this year.

On the liquid and dangerous goods carrier sector, chemical carriers totalled by 261 with 997,000 deadweight tonnes as of the end of last year, up 17.9 per cent and slightly faster than the growth of 17.3 per cent in 2011. Oil carriers also saw capacity increasing with a faster growth.