Drewry: Further carrier mergers may do no good, but is there any choice?
DESPITE the current wave of mergers, London’s Drewry Maritime Research doubts much good will come of further consolidation because it would only lead to the sector’s massive overcapacity falling into fewer hands. 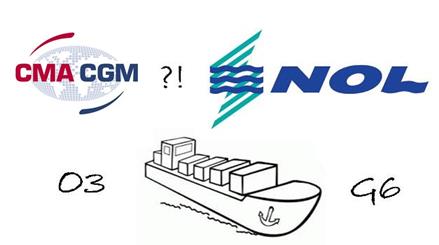 Yet with 55 per cent of the market in the hands of five top carriers this poses an existential threat to the numerous yet much smaller surviving carriers, now left with little option but respond with further consolidation.

But such tendencies are countered by subdued valuations, making such options less appealing, said Drewry.

The union of CMA CGM and APL, and the expected Cosco-CSCL merger help the newly expanded liner companies close the gap on Maersk Line and Mediterranean Shipping Co at the top of the rankings.

This is will mean that the top five largest carriers will control 55 per cent of the world’s container fleet.

In the case of CMA CGM’s takeover of NOL, Drewry said that while both parties can claim some victory in the valuation of the sale, there are signs that the deal is merely a one-off.

CMA CGM will purchase NOL for US$2.4 billion, or 96 per cent of the book value of the company’s shareholders’ equity of $2.5 billion, while NOL’s shareholders will secure a 49 per cent premium on the share value before the company announced it was engaged in sale talks in July.

This book price is low in comparison with the two major deals concluded a decade ago for P&O Nedlloyd and CP Ships, but is on the high side when set against the current industry average of 80 per cent, said Drewry.

“Nonetheless, selling below book value is hardly likely to encourage other owners to rush to sell and neither have NOL’s peers seen any significant uplift in their share valuation, something that usually occurs when further M&A in a sector is anticipated,” said Drewry.

Drewry highlighted that in 2005 the book price multiples were much higher as those deals followed several years of record profits for carriers.